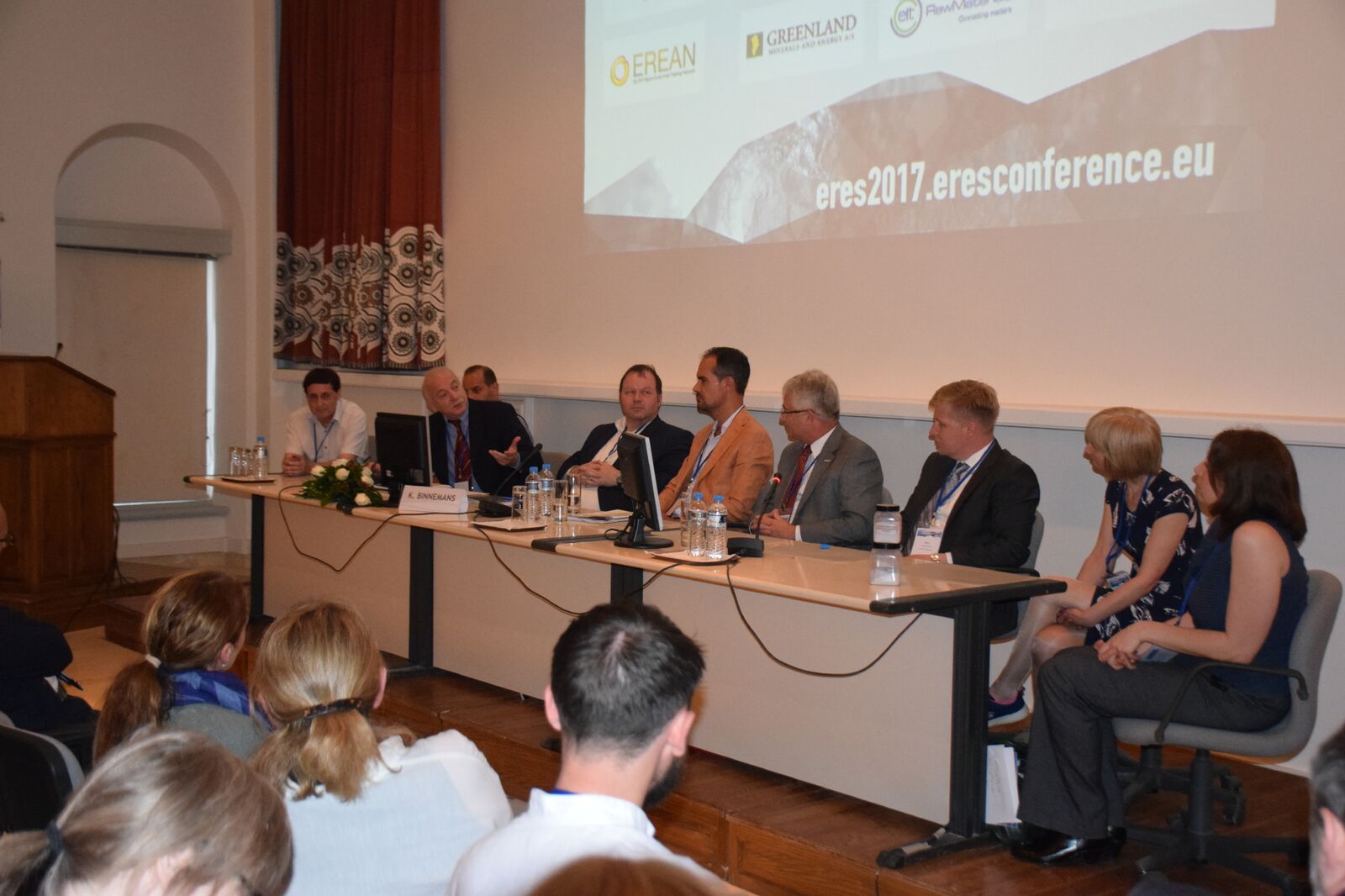 On May 28-31, 2017, the picturesque Greek island of Santorini was the place to be for the European Rare-earth research and innovation community. More than 200 people took part in the 2nd Conference on European Rare Earth Resources, which was a joint organisation by the FP7 EURARE and the FP7 MC-ITN EREAN projects. The conference featured more than 130 papers and speakers, which was substantially more than for the first ERES Conference in Milos in 2014, highlighting the growing rare-earth community in Europe. Here below you can read a personal analysis of the conference: “ERES 2017: Six lessons learned”. Furthermore, you can also find all links to the ERES 2017 Conference Proceedings and the presentations given by the ITN/ETN EREAN, DEMETER and REDMUD PhD students, postdocs and supervisors.

In a multitude of lectures it was made clear that the rare-earth “Balance Problem” is more relevant than ever. The Balance Problem relates to an imbalance between the demands of the market for individual rare earths (REEs) and the natural abundance of REEs in ores, leading to . surpluses (or shortages) of specific REEs. As indicated in previous work (Binnemans & Jones, 2015; Binnemans et al, 2013), the Balance Problem has been a major issue in the (near) past and present. For instance, cerium (Ce) is produced in large quantities by mining REE ores for the production of neodymium (Nd). This has resulted in an oversupply of cerium, which is currently stockpiled. What became clear during ERES 2017 is that the REE Balance Problem is not going to be solved soon. In his keynote lecture “The growing imbalance between production and consumption of individual rare earth elements” Ryan Castilloux (Adamas Intelligence) showed the latest data concerning this issue. His main conclusion was that “over the coming ten years, the rapidly growing demand for NdFeB permanent magnets will drive demand for Nd and Pr to unfathomable new heights, exacerbating the balance problem.” To alleviate this problem, Castilloux called for new REE mines and for “intra-lanthanide substitution”: this is the use of “surplus” REEs (i.e. Ce) in place of a portion of “scarce” REEs (i.e. Nd, Pr) in key end-uses and applications. 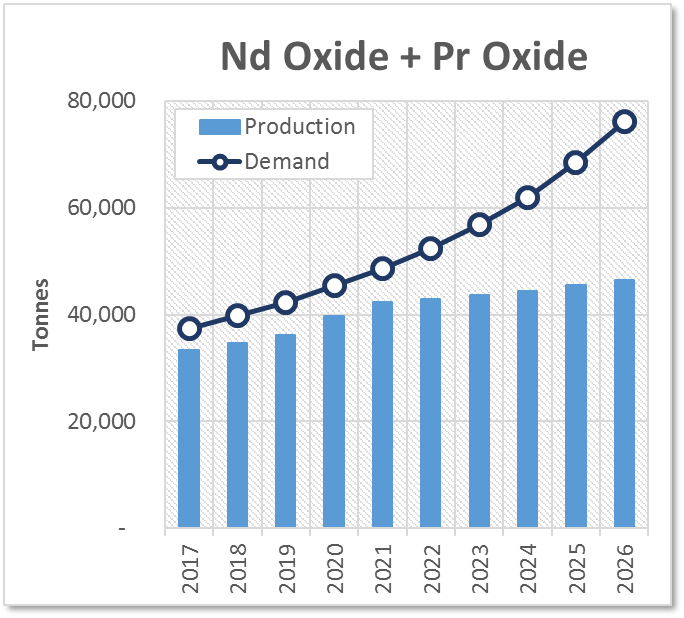 Strangely enough Castilloux did not explicitly mention the role of REE recycling in the mitigation of the REE Balance Problem (see Binnemans et al, 2013). This is peculiar as the importance of REE recycling (as a possible solution to the Balance Problem) has been well documented (Binnemans & Jones, 2015; Yang et al, 2017), in particular for the recycling of NdFeB permanent magnets. Recycling of these magnets from e-cars, e-bikes, hard disk drives, wind turbines etc. can provide an alternative (and also green) supply of both neodymium and dysprosium, without generating an excess of cerium and lanthanum (as is the case with the primary mining of REE ores). The importance of the Balance Problem has also been highlighted in the final report of the European Rare Earths Competency Network (ERECON).

The omission of REE recycling in Castilloux’ lecture/paper is illustrative for the (lack of) weight that is currently given to this field, which is in stark contrast with the attention primary mining of REEs receives. Despite the fact that ERES 2017 featured 41 articles on REE recycling (including two keynotes on REE recycling from the EREAN and REMAGHIC projects), the topic was underrepresented in the crucial opening and closing sessions of the conference. During these sessions, key figures from industry, the European Commission, public bodies and academia discussed the way forward for the EU REE industry. A critical analysis of these Q&A sessions demonstrates that both industry and consultants do not (yet) take REE recycling as a serious partner for primary mining of European REE ores. Two key barriers for widespread REE recycling are the long lag times for key metals to become available for recycling (e.g. NdFeB magnets in wind turbines) and the poor economics (cf. low REE prices in 2017). This should be a “call to arms” for the REE recycling communities: it is of paramount importance to come up with new direct/indirect recycling flowsheets that are relatively simple and limit the use of costly chemicals, thus generating more favourable OPEX and CAPEX features.

Until recently it was generally perceived that Europe does not really own REE-rich ore deposits on home soil and that it would remain dependent on REE-rich countries like China. The FP7 EURARE project set out to investigate the primary REE potential in Europe. As became apparent in the inspiring talk of Kathryn Goodenough of the British Geological Survey, Europe is NOT poor in REE deposits. In fact, geological analyses have shown that the EU has a wide range of primary REE resources, which could easily meet the domestic REE demand. There are several barriers for REE mining in Europe, including the economics (cf. low prices for most REEs anno 2017!), environmental permitting and local protests, radioactivity issues etc.). The stark truth is that anno 2017 there is still no operational REE mine in Europe. This situation might, however, change in the near future. ERES 2017 showed very clearly that punters should put their money on the Kvanefjeld mining project in Greenland, driven by Greenland Minerals and Energy Ltd. In one of the most impressive lectures of the conference, Damien Krebs (Greenland Minerals and Energy) highlighted that this project is coming closer to fruition. Started in 2007 the project is now in the final permitting phase. During this period the company has spent around $80 million in mineral resource and metallurgical evaluation, along with the study of environmental and social impacts. 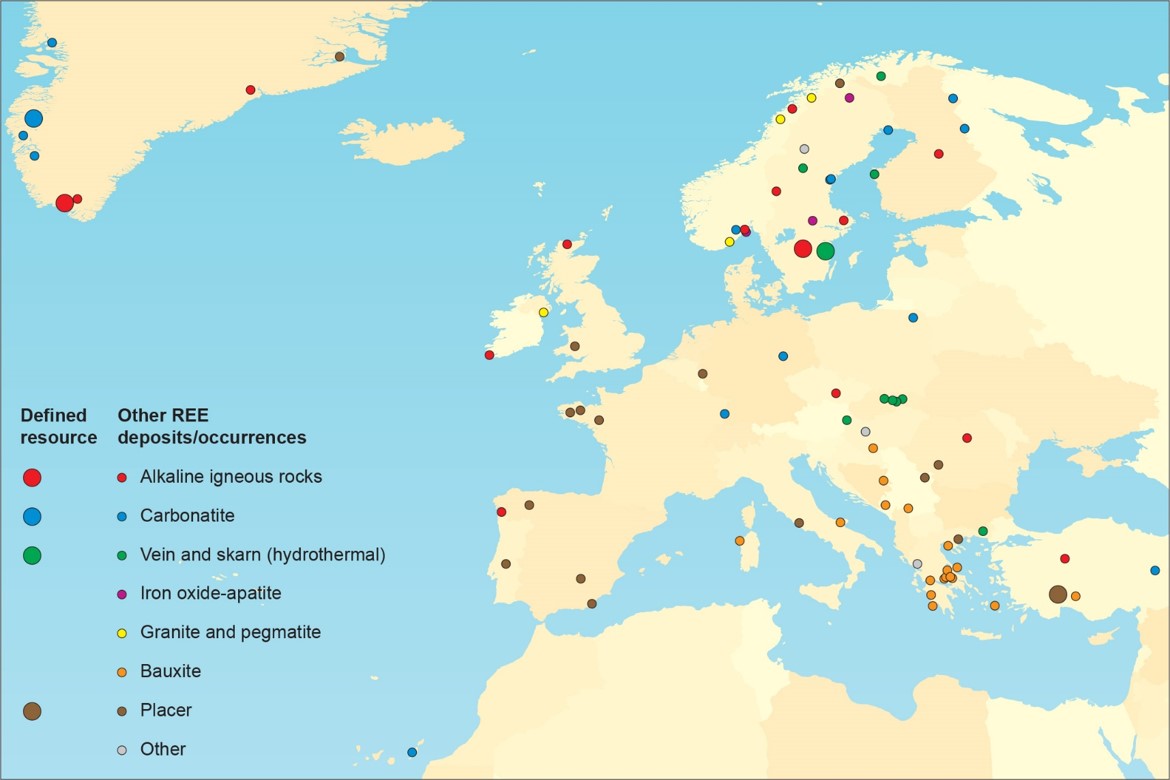 During the closing session of ERES 2017, both Damien Krebs and Mattia Pelegrini (Head of Unit Resource Efficiency and Raw Materials, DG GROW, European Commission) pointed out that the future of REE primary mining in Europe is heavily dependent on obtaining AND maintaining a social license to operate. The present situation of the REE Norra Karr mining project speaks volumes in this context (cf. mining licence issues for Tasman Metals). Terms like greenfield mining and responsible sourcing were all used in the same context and indeed show how important it is to engage with the local and (general) EU community in an open dialogue so as to ensure full buy-in amongst all stakeholders. This is only possible if the mining company can guarantee that its primary mining project uses green mining and processing technologies and, concurrently, provides clear benefits to the communities living in the vicinity of such mines. In densely populated areas, where civil societies are professionally organised, it is essential to come to win-win situations when mining projects are initiated. That’s the only way to go beyond the NIMBY-syndrome (NIMBY = “Not In My Back Yard”). This is very similar as for the attempts to initiate Enhanced Landfill Mining (or on-shore wind energy) projects in Europe.

In his opening keynote lecture one the main guests, Mattia Pelegrini (DG GROW), provided an update on the work of the EU Raw Materials Initiative. Pelegrini announced that a third version of the EU criticality figure will be launched soon. Following the reports in 2011 and 2014, the 2017 report will involve a slightly modified approach to calculate the criticality level of a raw materials. The definition of a critical raw material (CRM) still refers to a material “with high risk of a supply disruption and, at the same time, with high economic importance to the EU economy”. Pelegrini clearly mentioned that the figure will be used as a policy tool. As such it will “incentivise the European production of critical raw materials and facilitate the launching of new mining and recycling activities.”

The ERES 2017 participants were hoping to receive a sneak preview of the figure but, unfortunately, Pelegrini declined, which is of course perfectly understandable giving the sensitive character of the final result. We will, therefore, have to wait to see which metals/materials will still be in the quadrant of criticality (e.g. antimony, germanium and which new ones will appear (for instance, cobalt & lithium?). Nevertheless, the chance that the REEs (like neodymium and dysprosium) would disappear altogether from the criticality region of the figure is almost zero. 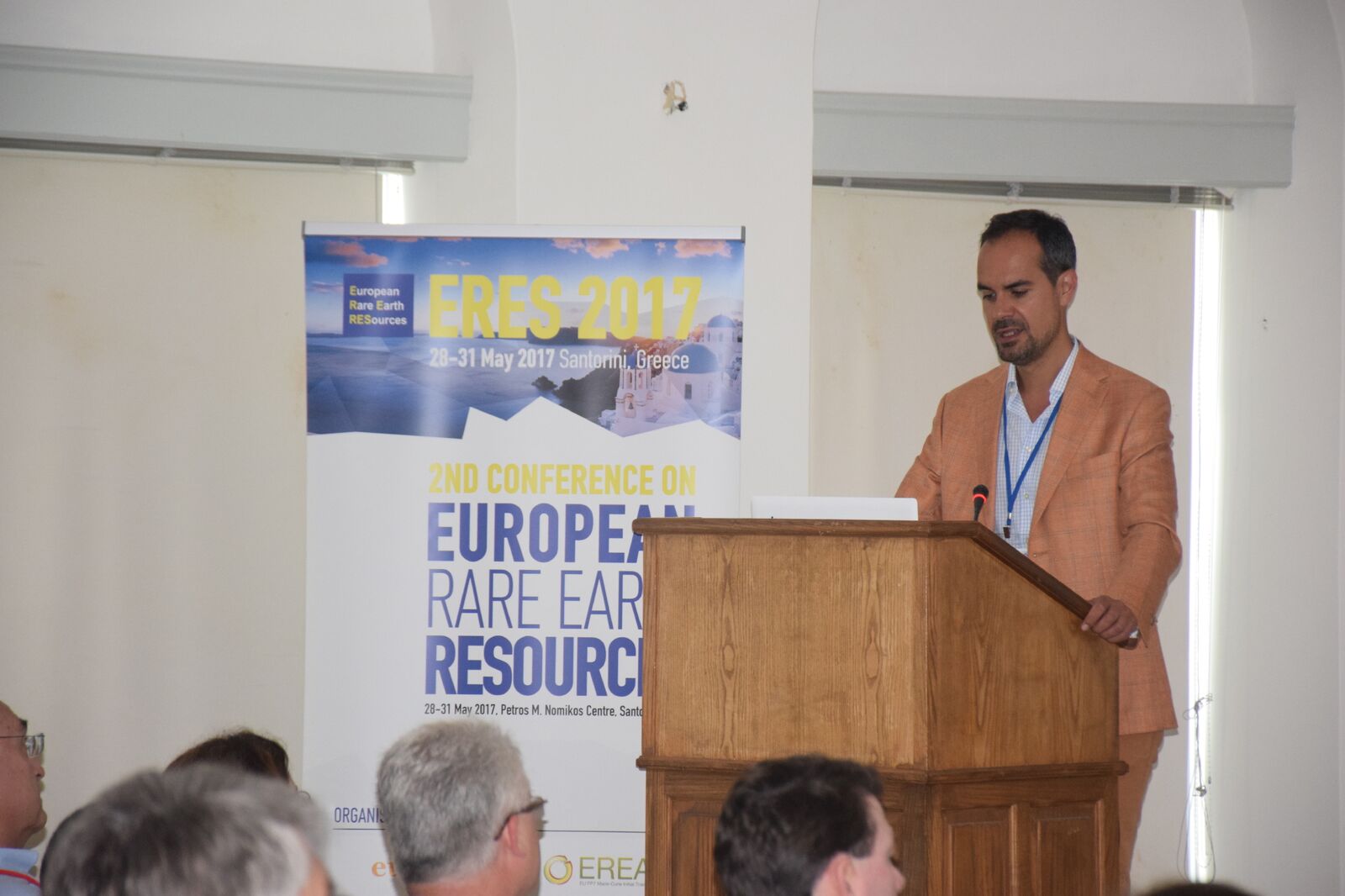 During the concluding session there was also an interesting debate about the situation of the REE research community in Europe. Pelegrini (DG GROW) highlighted the importance of the fact that more than 40 PhD students attended (and presented their work at) the ERES 2017 conference. This shows that, in contrast with the situation in 2011, Europe has now trained an “army of REE researchers”. So far the good news. The bad news is that due to the low prices of the REEs anno 2017, industrial interest in the REE value chain has declined again, corroborated by the fact that Solvay (former Rhodia part of the company) closed its flagship REE separation plant in La Rochelle. This implies that at this moment the Silmet plant in Estonia represents the only REE separation capacity in Europe. The situation is now, despite all REE research efforts, more bleak than it was in 2011. Furthermore, Solvay also closed down its lamp phosphor recycling plant because of the poor economics and the decreasing demand for lamp phosphors (for CFL lamps). No other industrial REE recycling activities are currently taking place in Europe, despite a vast amount of developed recycling solutions.

Hence, there is now a clear danger that key REE competences will be (slowly) lost again. This is exactly what happened in the period 1990-2011, during which most of the experts in the European rare-earth industry moved to other fields or retired. As recently indicated in the Policy Brief by Prof. Koen Binnemans (KU Leuven), Europe must draw lessons from the past and must not make the mistake of losing the expertise and knowledge that has been built up during the last few years. Therefore, it is strongly recommended that the EC continues to support project proposals to further develop new technologies in the field of REEs (and other key materials such as antimony, cobalt, lithium etc.) to prepare the European companies for the next rise in the prices of (at least some) rare earths (and other CRMs), which can surely be expected in the near future.

However, as clearly indicated in the closing session by Prof. Bernd Friedrich (RWTH Aachen) it is of paramount importance to avoid redundancy in research. Friedrich pointed out very clearly that too many researchers in Europe are just performing work which has already been tested by other people in the past. A more precise description of the state-of-the-art and a better knowledge of the on-going projects in the field should thus be a condition sine qua non for the funding of any new EU (or national) projects in the future. Pelegrini (DG GROW) acknowledged this comment and made clear that the EC is preparing activities to cluster different EU projects in an attempt to avoid future redundancies. In the EIP Raw Materials Week in November 2017 the REE research community will meet again! 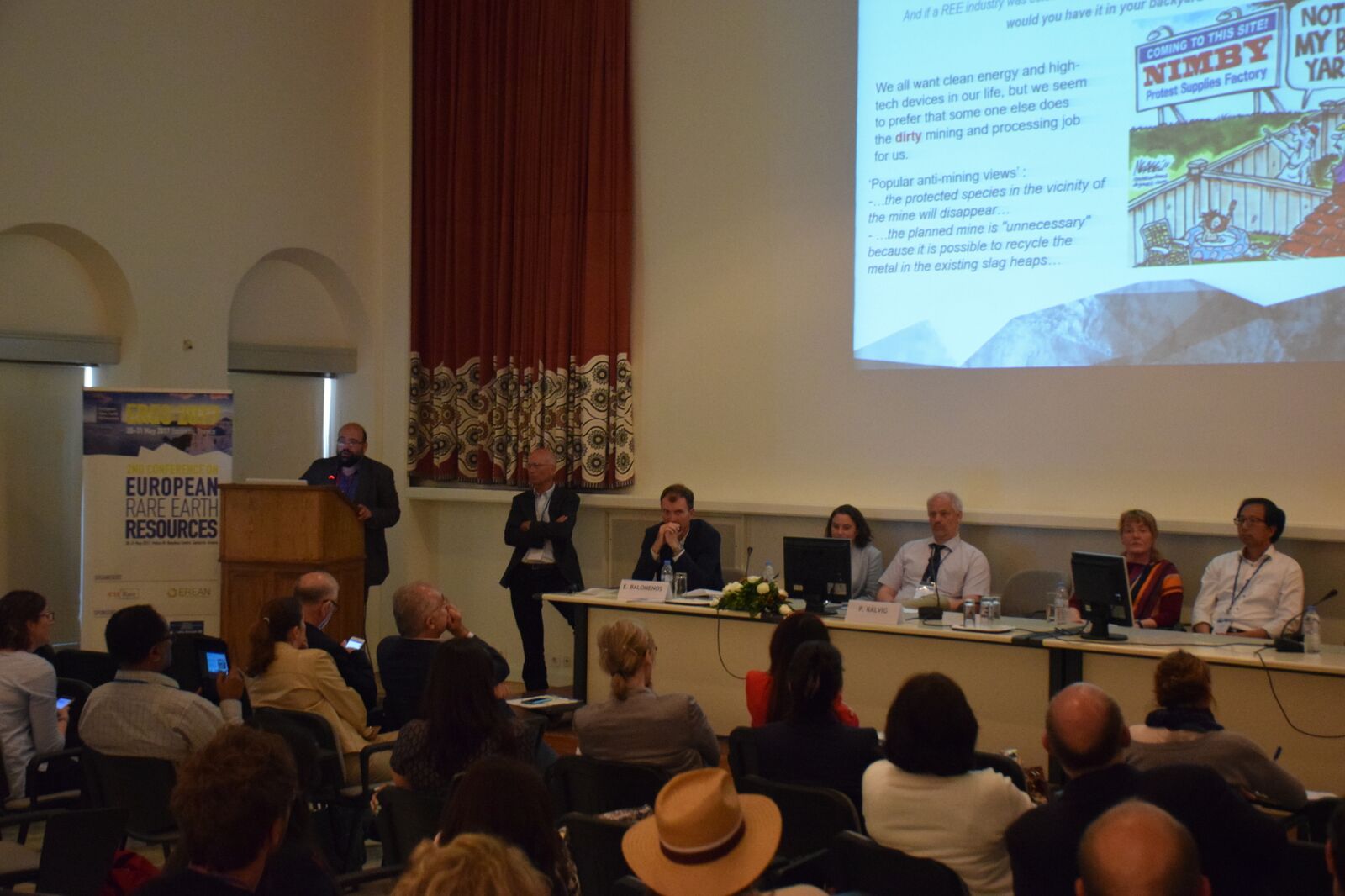 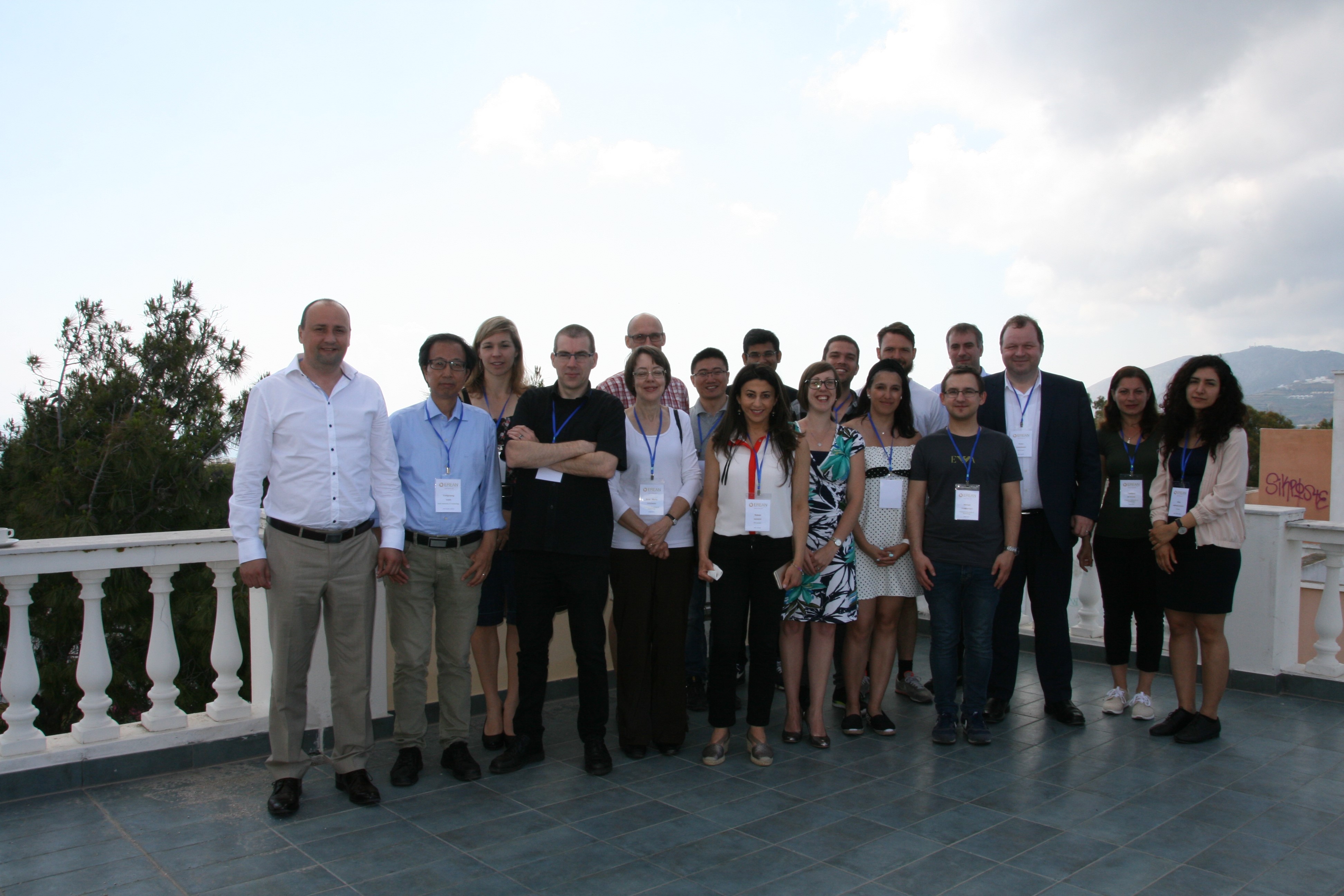