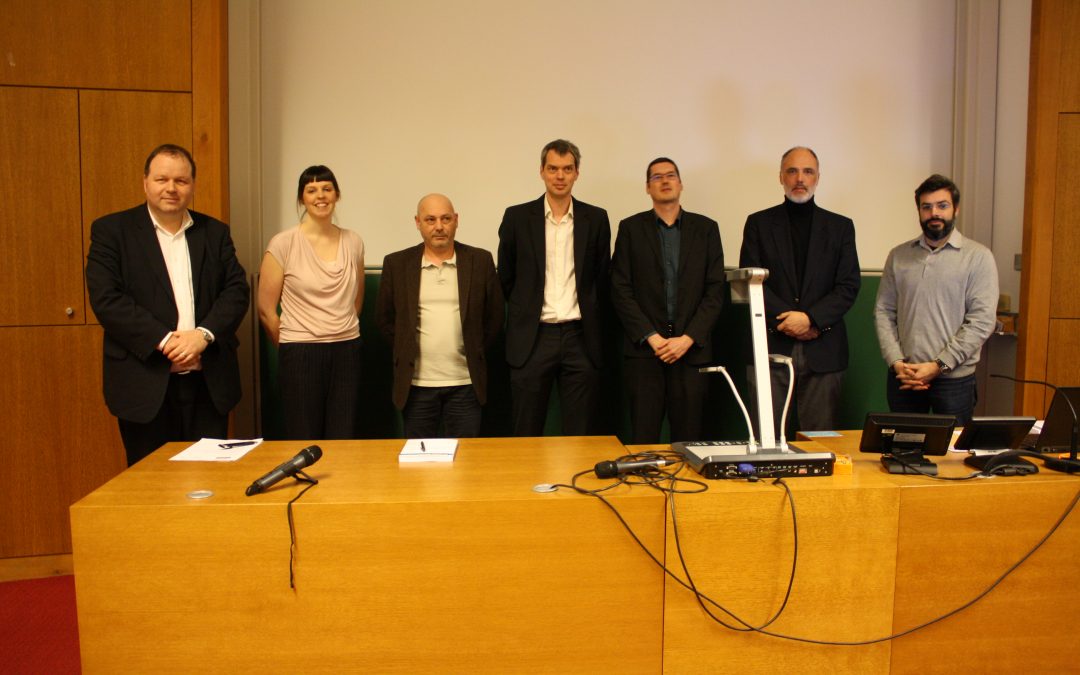 On March 9th, 2018, Bieke Onghena obtained her PhD degree in Chemistry. She successfully defended her PhD thesis entitled ‘Ionic liquid solvent extraction (SX) for the recovery of rare earths and cobalt’. The research was supervised by Prof. Koen Binnemans (promotor). Dr. Onghena was granted a personal doctoral mandate by the Flemish Institute for Innovation through Science and Technology (IWT). A list of the (nine) peer-reviewed papers published in the framework of her PhD can be found below. (PTJ/14-3-2018, Leuven) 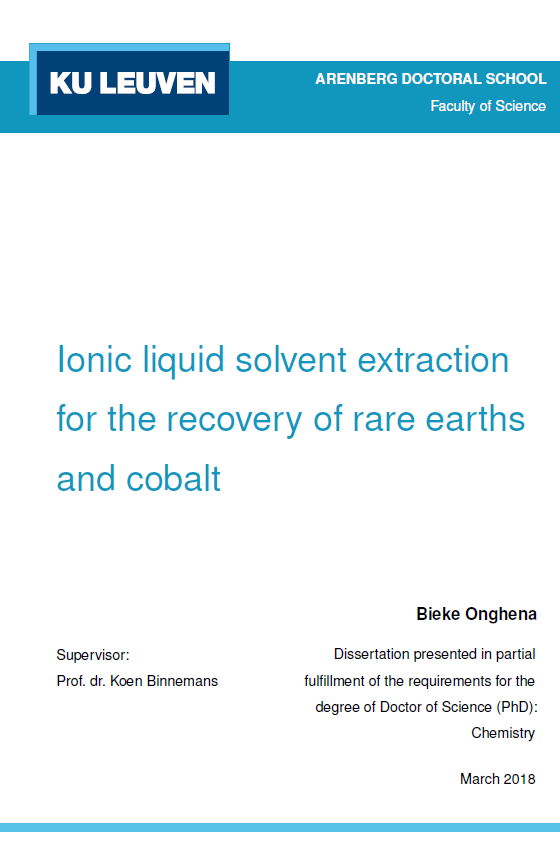 Secondary resources are essential to maintain the supply of critical metals in our fast-developing society. Recovery of metals from waste materials is not only important to meet the increasing demand, but also in view of a sustainable future for our planet. The rare-earth elements are listed as critical metals by the European Commission because of their essential role in, amongst others, permanent magnets for many high-tech and green applications such as electrical vehicles and wind turbines. Furthermore, Europe is highly dependent on the import from China for rare-earth compounds since almost all production is located there. Another critical metal considered in this PhD thesis is cobalt. Primarily because of its use in rechargeable batteries, also cobalt is essential to our transition to a sustainable society.

Recovery of metals from solid waste materials generally requires the metals first to be extracted from the solid matrix by leaching. The obtained leachate contains besides the targeted metal ion, also several co-extracted metal ions. Solvent extraction is the most applied technique for the purification of metal ions from aqueous solution. It allows the efficient processing of large volumes of feed solution in a continuous mode.

Recently, a new class of solvents found its way to the general public, namely ionic liquids. These liquids, containing only ions, have interesting properties including a negligible vapor pressure, a broad liquidus range and a broad electrochemical window. It is possible to design hydrophobic ionic liquids that are either able to solvate metal ions or dissolve metal-coordinating compounds. This resulted in the beginning of the 21st century in the application of ionic liquids in solvent extraction, and the research field has been growing ever since. Ionic liquids are often highlighted as green alternative solvents because of their negligible vapor pressure. On the other hand, safety is much more relevant. The ionic character and low flammability of ionic liquids makes them safer in use than traditional solvents. An important issue related to ionic liquid solvent extraction is the loss of ionic liquid constituents to the aqueous phase by ion exchange. Although this is not observed in every system, it should be checked for and prevented as much as possible.

In this PhD thesis, a combination of fundamental research and a more applied approach is used to investigate the application of ionic liquid solvent extraction for the separation and recovery of the critical metals cobalt, scandium, yttrium and the lanthanides. The ionic liquid betainium  bis(trifluoromethylsulfonyl)-imide, [Hbet][Tf2N], was studied for the purification of scandium from bauxite residue leachates. To start, the extraction behavior of the various metal ions present in bauxite residue has been determined using synthetic solutions. Next, the system was applied to the waste material itself. Scandium was brought into solution by sulfation-roasting-leaching. Subsequently, Fe(III) was reduced to Fe(II) and Sc(III) was selectively extracted. After scrubbing and stripping with mineral acids, scandium was precipitated as a solid compound with oxalic acid and NaOH. Furthermore, the ionic liquid [Chol][Tf2N] was tested as a diluent for the extractant choline hexafluoroacetylacetonate, [Chol][hfac], and applied to the extraction of the lanthanides. Neodymium was chosen in particular, as a model ion, since all the lanthanides show similar chemical behavior. The extraction mechanism was investigated using solvent extraction techniques and crystal structure determination. It was shown that the species [Chol][Nd(hfac)4] was formed in the organic phase. Next, the separation of Co(II) and Ni(II) was investigated with two extraction systems, namely (1) a proof-of-principle of the use of ionic liquid-based aqueous biphasic systems for the separation of metal ions and (2) a study of the extraction of Co(II) from sulfate solution with the basic extractants trihexyl(tetradecyl)phosphonium chloride (Cyphos IL 101) and its thiocyanate salt.

Finally, it was concluded that ionic liquids show potential for the recovery of critical metals by solvent extraction. Advantages of the investigated systems included their selectivity towards the targeted metals and the fact that no organic solvents were used, hence the process was safer. Significant drawbacks were the high viscosity and high solubility in water of some of the investigated ionic liquids.

Publications by Bieke Onghena in the framework of her PhD