New paper on the effect of the diluent in REE SX 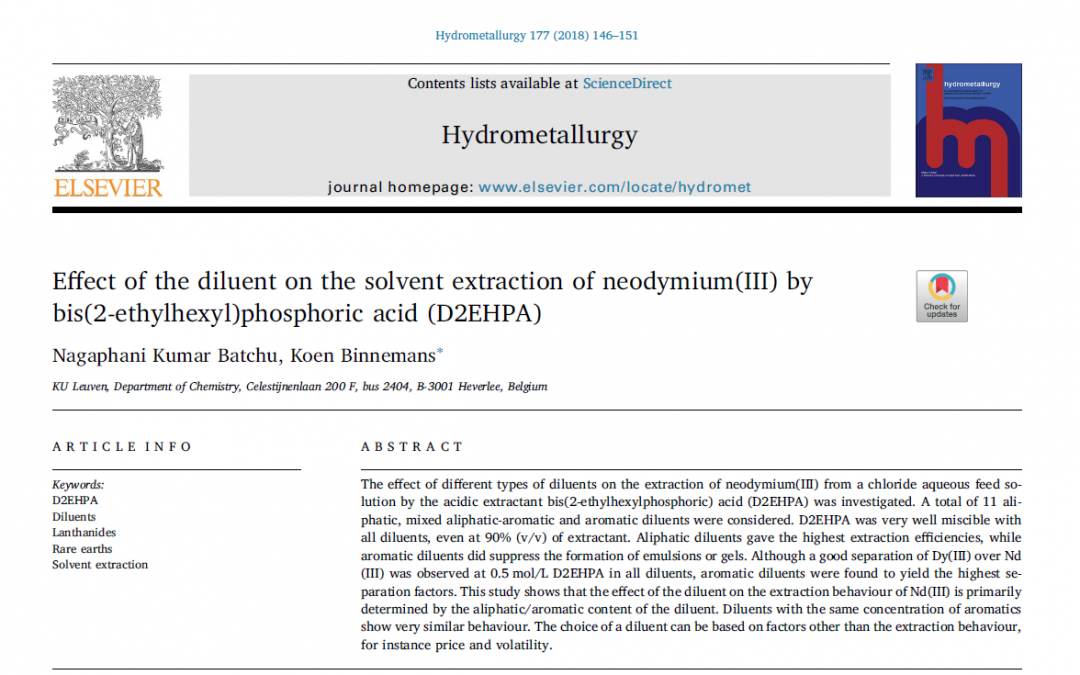 This new Hydrometallurgy paper by Kumar Batchu and Binnemans (SIM² KU Leuven & SOLVOMET) studies the effect of the diluent on the solvent extraction of neodymium using D2EHPA as extractant. A total of 11 aliphatic, mixed aliphatic-aromatic and aromatic diluents were considered, with specific attention for the new class of Gas-to-Liquid (GTL) solvents. (Leuven, 20-3-2018)

Solvent extraction is an important separation technique for mixtures of metals, including rare-earth metals. The technique is based on the selective distribution of the metal ions between an aqueous phase and an immiscible organic phase. The organic phase consists of an extractant, a diluent and a modifier. The main roles of the diluent are to dissolve the extractant (and modifier), to modify the concentration of the extractant in the organic phase and to reduce the viscosity of the extractant. Diluents also help to reduce the tendency of the emulsification of the extractant. Likewise, they improve the dispersion and coalescence properties of the solvent. The objective of this paper is to study the effect of different diluents on the extraction behaviour of neodymium(III) from chloride aqueous solutions by the acidic extractant bis(2-ethylhexyl)phosphoric acid (D2EHPA). Neodymium(III) was selected as a representative rare-earth ion while D2EHPA is a commonly used extractant for rare-earth ions. The separation of dysprosium(III) from neodymium(III) was investigated because this separation is relevant for the recycling of rare earths from NdFeB permanent magnets. A total of 11 diluents were considered. The diluents were either aliphatic solvents, mixed aliphatic-aromatic solvents or aromatic solvents. Halogenated organic solvents were not taken into account because of environmental issues.

The effect of different types of diluents on the extraction of neodymium(III) from a chloride aqueous feed solution by the acidic extractant bis(2-ethylhexylphosphoric) acid (D2EHPA) was investigated. A total of 11 aliphatic, mixed aliphatic-aromatic and aromatic diluents were considered. D2EHPA was very well miscible with all diluents, even at 90% (v/v) of extractant. Aliphatic diluents gave the highest extraction efficiencies, while aromatic diluents did suppress the formation of emulsions or gels. Although a good separation of Dy(III) over Nd(III) was observed at 0.5 mol/L D2EHPA in all diluents, aromatic diluents were found to yield the highest separation factors. This study shows that the effect of the diluent on the extraction behaviour of Nd(III) is primarily determined by the aliphatic/aromatic content of the diluent. Diluents with the same concentration of aromatics show very similar behaviour. The choice of a diluent can be based on factors other than the extraction behaviour, for instance price and volatility. 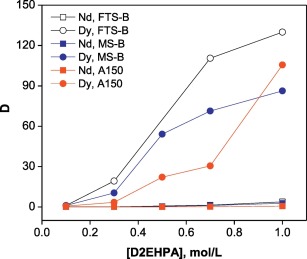 Figure: Effect of the D2EHPA concentration in selected diluents (FTS-B, MS-B and A150) on the percentage extraction of Dy(III) and Nd(III) from chloride solutions.

The authors acknowledge KU Leuven (projects GOA/13/008 and IOF-KP RARE3, and an F+ postdoctoral fellowship to NKB) for financial support. The authors wish to thank René Wiersma (Shell Global Solutions Int. B.V., Amsterdam, The Netherlands) for providing samples of the diluents and for scientific discussions.