The Quest of the Negative Sequence (for extraction of REEs) 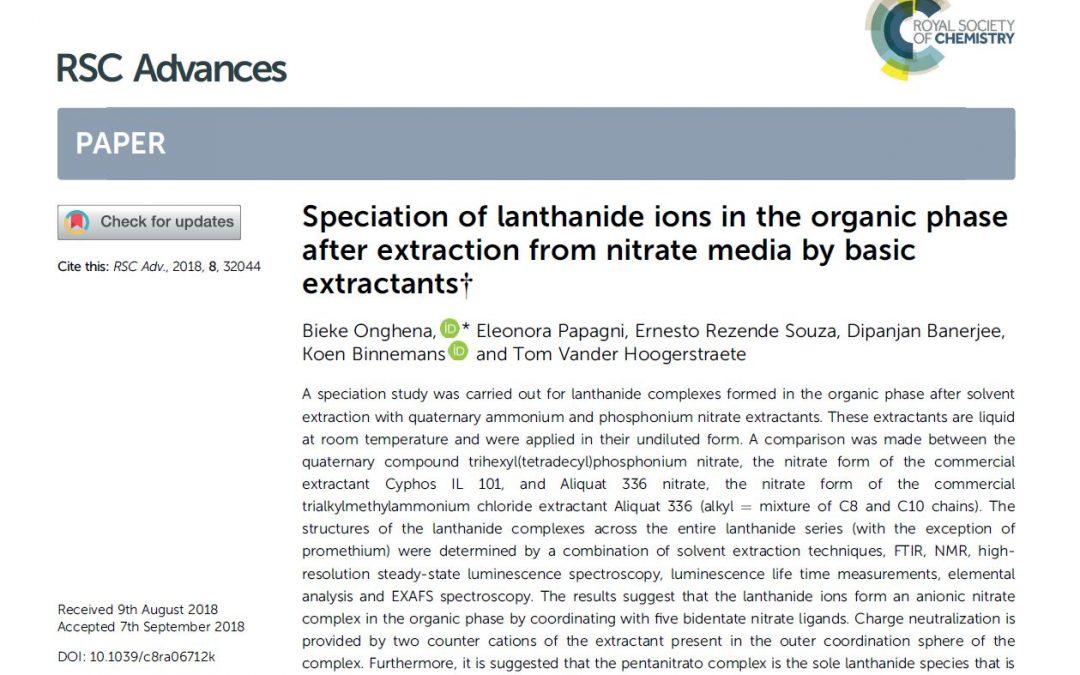 The extraction of lanthanides from nitrate media with basic nitrate extractants shows a remarkable decreasing trend when going from left to right in the lanthanide series. The Binnemans group (SOLVOMET KU Leuven) is taking the first step into explaining this phenomenon in a recent publication “Speciation of lanthanide ions in the organic phase after extraction from nitrate media by basic extractants” in RSC Advances. (Leuven, 25/10/2018)

However, some extractant systems show a deviating behavior. For instance, some carboxylic acid extractants first show an increase in extraction for the light rare-earth elements (LREE) with increasing atomic number, then go to a maximum and again decrease for the heavy rare-earth elements (HREE). A remarkable case is the extraction of lanthanides from nitrate media with quaternary nitrate salts (which act as basic extractants/anion exchangers), where the behavior is completely reversed: the distribution ratios linearly decrease when going from left to right in the lanthanide series. The LREE have a much higher tendency to be extracted than the HREE. This phenomenon is also referred to as “the negative sequence”.

The exact scientific reason for this curious behavior has not been fully elucidated yet. In general, researchers assumed that it might be due to a sterical hindrance effect which the nitrate ligands experience when they are coordinating to the smaller trivalent ions of the HREE. Experimental evidence which proves this theory, however, is not yet available.

With this work published in the Journal RSC Advances, the group of Prof. Binnemans wants to shed light on the mechanism and the origin of the negative sequence in the extraction of trivalent lanthanide ions with basic nitrate extractants. With various complementary spectroscopic techniques, the researchers studied the structure of the lanthanide complexes in the organic phase.

By combining the results of the different techniques, they concluded that the same species is formed with all the lanthanide ions: a trivalent lanthanide ion coordinated by five nitrate ligands. Furthermore, they observed that the bond distances of the coordination bonds between the lanthanide center and the nitrate ligands decreased linearly with the ionic radius. Consequently, steric effects are most likely not influencing the structure of the complex.

The researchers finally concluded that the reason for the negative extraction behavior can probably not be found in the speciation of the lanthanides in the organic phase and the explanation should rather be searched for in the aqueous phase of the extraction mixture. Food for thought and a follow-up publication …

Dr. Bieke Onghena recently started working as a Research Expert “Coordination Chemistry in Solvent Extraction” in the SOLVOMET Group, headed by Prof. Koen Binnemans (Department of Chemistry, KU Leuven, Belgium). She successfully obtained her PhD in the Binnemans group in the beginning of this year (see URL Link: Phd_Bieke_Onghena_IL_SX_2018). Her interests include solvometallurgy, solvent extraction, coordination chemistry and studying metal speciation with EXAFS. Bieke’s mission in the SOLVOMET Group is to gain a deeper understanding of solvent extraction mechanisms with the help of multi-technique metal speciation studies and in this context, support the entire SOLVOMET team.

The authors thank the KU Leuven (projects GOA/13/008 and IOF-KP RARE3), the FWO Flanders (postdoctoral fellowship to TVDH), Flemish Agency for Innovation and Entrepreneurship (PhD fellowship to BO) and the Brazilian Science without Border program from CNPq (postdoctoral fellowship to ERS) for funding. The research leading to these results received funding from the European Research Council (ERC) under the European Union’s Horizon2020 Research and Innovation Programme: Grant Agreement 694078—Solvometallurgy for critical metals (SOLCRIMET). 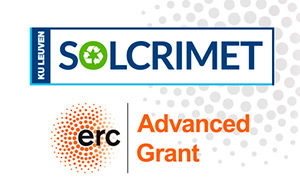