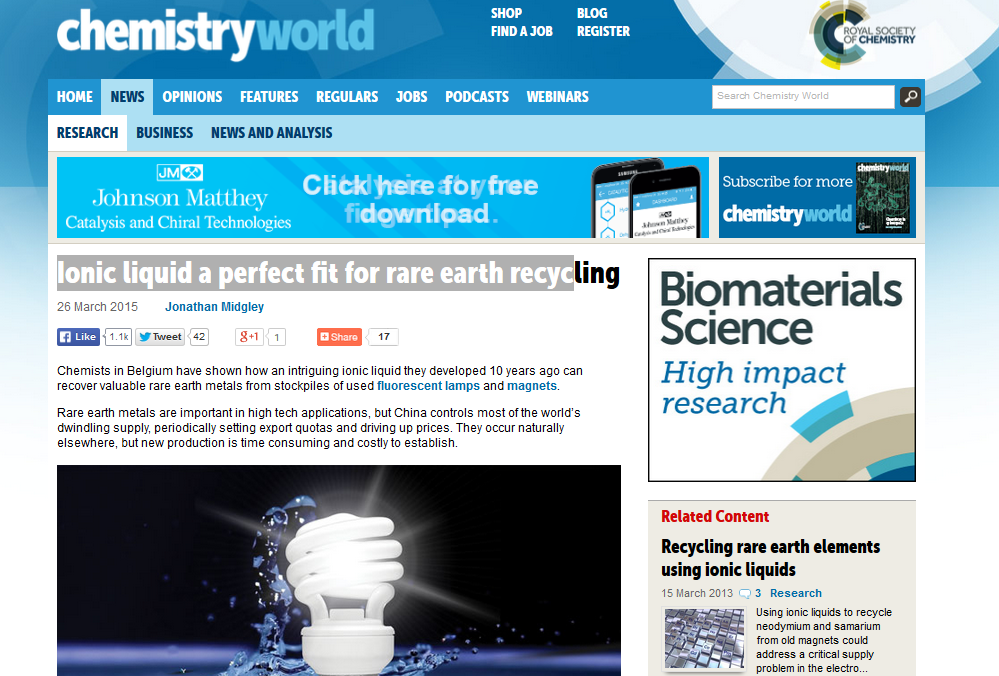 Chemists in Belgium have shown how an intriguing ionic liquid they developed 10 years ago can recover valuable rare earth metals from stockpiles of used fluorescent lamps and magnets.

Rare earth metals are important in high tech applications, but China controls most of the world’s dwindling supply, periodically setting export quotas and driving up prices. They occur naturally elsewhere, but new production is time consuming and costly to establish.

However, significant quantities of these metals exist in sources much closer to home: neodymium rich magnets, which are crucial components of electric motors and dynamos, and fluorescent light bulbs. Recycling is not widespread as current methods are expensive and polluting, using a large amount of solvent to dissolve mostly unwanted material. The valuable rare earth content – in the form of red phosphor, Y2O2:Eu3+ – is not often recovered from old household light bulbs, the main focus being safe mercury disposal with the rest going to landfill.

Koen Binnemans and David Dupont at the University of Leuven realised an ionic liquid, [Hbet][Tf2N], they developed in 2006 could be the answer due to its ability to selectively dissolve certain metal oxides. ‘It was a strange coincidence … we had largely forgotten for several years, until quite recently we realised that red phosphor is in fact an oxide … we thought, OK, let’s give it a try, and let’s hope that the other compounds do not go into solution,’ recounts Binnemans. Their foresight was rewarded – results showed that 100% of the red phosphor, and nothing else, dissolved. Then, they took advantage of the fact that [Hbet][Tf2N] is thermomorphic – meaning that on mixing with water it separates from one into two phases as it cools below 80°C – to firstly dissolve, and then separate, metal oxides from pre-roasted NdFeB magnets. Upon cooling, iron oxides move into the ionic liquid phase and all the valuable metal oxides are found in the water.

‘It’s some kind of magic ionic liquid, with many applications,’ says Binnemanns. But what causes these highly selective phenomena? ‘It’s the special combination of having a positive charge on the cation close to the carboxylic acid group that gives the ionic liquid special properties, in combination with the anion that makes the ionic liquid non-miscible in water.’

After dissolution it is simple to precipitate out the metals using oxalic axid, which also automatically rejuvenates the ionic liquid, a significant economic and environmental advantage. ‘It is clear that these methods are very selective in separating the targeted rare earths and that there are many advantages compared to conventional solvent extraction routes, for example that the ionic liquid can be regenerated easily,’ comments rare earth magnet expert, Allan Walton, from the University of Birmingham, UK.

The group are keen for their processes to be scaled up in collaboration with chemical engineers and industry, but the economics of this are dependent on the volatile price of rare earth metals. Meanwhile their next target is the much tougher dissolution of green lamp phosphor (LaPO4:Ce3+), and although preliminary results are promising, the structure of the ionic liquid used cannot yet been revealed.