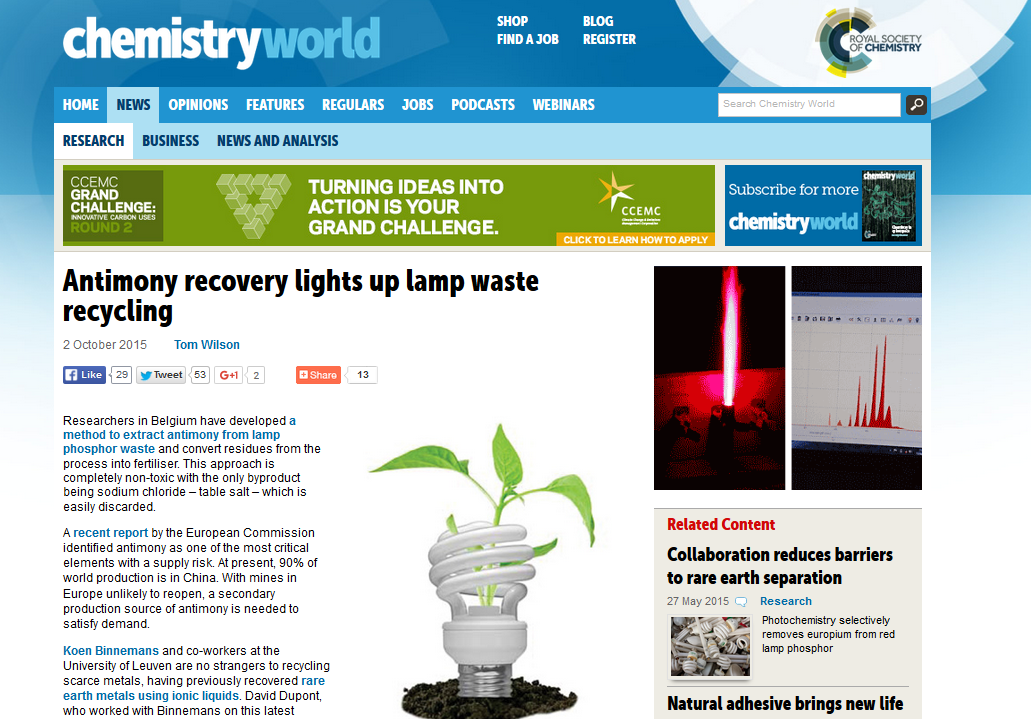 Researchers in Belgium have developed a method to extract antimony from lamp phosphor waste and convert residues from the process into fertiliser. This approach is completely non-toxic with the only byproduct being sodium chloride – table salt – which is easily discarded.

A recent report by the European Commission identified antimony as one of the most critical elements with a supply risk. At present, 90% of world production is in China. With mines in Europe unlikely to reopen, a secondary production source of antimony is needed to satisfy demand.

Koen Binnemans and co-workers at the University of Leuven are no strangers to recycling scarce metals, having previously recovered rare earth metals using ionic liquids. David Dupont, who worked with Binnemans on this latest project, says the chemistry involved is not actually that complicated; rather it connects ideas together to produce useful materials and non-toxic byproducts. Indeed, the process has to be simple and use readily available materials to be feasible on a larger scale.

By dissolving lamp phosphor waste in hydrochloric acid, antimony, which makes up 50 percent by weight of the powder, can be extracted with a reusable ionic liquid. The remaining aqueous solution is treated with sodium hydroxide, which precipitates calcium phosphate – a useful material for fertilisers and other applications. Indeed, Dupont explains this is a cleaner ways to obtain fertilisers than extracting the material from rock. ‘Phosphate rock is problematic as it contains toxic radioactive metals such as uranium, so these metals need removing and lead to toxic products; our method is much more pure as the lamps need high purity products.’

Srecko Stopic, an expert in metal processing and recycling at RWTH Aachen University, Germany, believes the Leuven study will significantly influence and impact waste recovery, and also be important for European countries seeking to produce antimony at room temperature with minimal energy and chemical consumption. ‘This idea to recover antimony can be a driving force to use a similar principle for other waste materials, for example ceramic waste materials,’ he says.

Dupont agrees, saying there are many other metal-rich industrial waste processes. Furthermore, antimony is not the only scarce metal in demand. Dupont says the group is now developing methods to recover other critical metals, such as gallium and indium, from industrial waste streams.
References