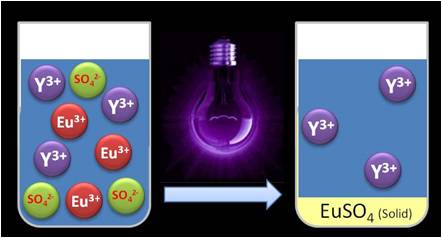 Researchers from the KU Leuven Department of Chemical Engineering have discovered a method to separate two rare earth elements – europium and yttrium – with UV light instead of with traditional solvents. Their findings, which were published in Green Chemistry, offer new opportunities for the recycling of fluorescent lamps and low-energy light bulbs.

But this process leaves much to be desired in terms of efficiency and purity: it needs to be repeated dozens of times to recover a high percentage of a particular rare earth metal, and there will still be traces of yttrium in the europium-containing liquid and vice versa.

In collaboration with KU Leuven chemists the researchers have now managed to recover europium from the liquid mixture with UV light instead of a solvent. “The UV light influences the electrically charged particles known as ions. Both europium and yttrium have three positive charges per ion. When we shine UV light upon the solution of europium and yttrium, we add energy to the system. As a result, one positive charge per europium ion is neutralised. When we add sulphate, only the europium reacts with it. The result is a precipitate that can easily be filtered, while the yttrium remains in the solution,” says Bart Van den Bogaert, who is preparing a PhD on the subject.

The advantages of UV light are that it does not leave behind any harmful chemicals in the liquid and that the separation efficiency and purity in synthetic mixtures are very high: more than 95% of the europium is recovered from the solution. The precipitate itself is 98,5% pure, so it contains hardly any traces of yttrium. A similar purity was obtained with industrial mixtures, but the efficiency of the separation still needs to be improved. That will be one of the next projects tackled by the KU Leuven researchers.

This research is part of Bart Van den Bogaert's doctoral research, which is funded by IWT (the government agency for Innovation by Science and Technology) and by KU Leuven Internal Funds (BOF and IOF). It is part of the research activities of the KU Leuven knowledge platform RARE3, a collaboration involving chemists, chemical technologists and material engineers, among others, to investigate the recycling of rare earth and other critical metals.